Most indigenous pig breeds in the Alps are already extinct. A few relict specimens in different valleys have survived. But they cannot be conserved on their own. The project brings them together in a gene pool and conserves them together. So at least the "eco-type" of the old alpine pigs should be preserved.

Since they are all black or black-spotted animals, breeding takes place under the name "Black Alpine pig", a name that was already used in old literature for the community Alps black pigs (eg JR Steinmueller, 1827). The Black Alpine pig is now a composite breed, but is based on actual remains of Alpine breeds. The project aims at a marketable animal that provides an opportunity for a sustainable Alpine farming again. 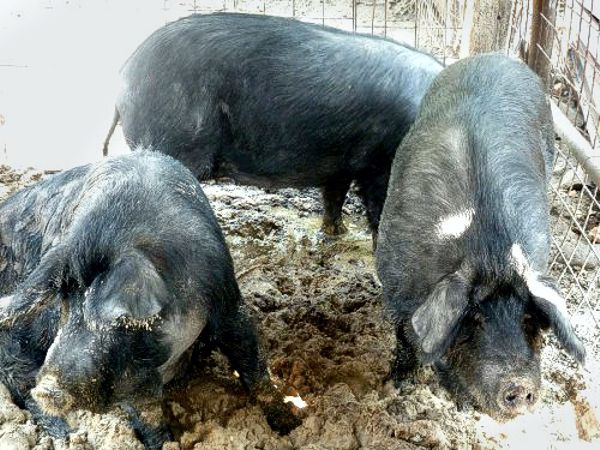 The Black Alps pig represents a pig that can be raised on the Alp and is a robust, pasture animal, as was common in the Alps before the promotion of high-input performance breeds. In an alp season of about 90-100 days, the pigs took advantage of the large diversity of mountain grasses and herbs. The nutrient-rich, aromatic plants (eg mountain plantain, alpine meadow-grass, thyme, yarrow, etc.) gave the meat of the pig a unique taste that would be label-worthy today. The inclusion of green fodder on the alp enriched in the meat with the valuable omega n3 fatty acids, which are missing in modern pork. Due to the constant movement of the animals and the slower growth by extensive farming, the meat was also more compact and the fat, as a flavour carrier, better distributed in the body (marbling). The old breeds also were characterized by great robustness, were used to life in the open field and needed therefore little care (and no medicines).

The project "Black Alpine Pigs" aims to set the qualities of this type in a market niche. Products from extensive farming, traditionally prepared, with high taste qualities and regionally produced have a future and are marketed with special labels. The aim of the project is to breed grazing pigs that can be raised on the alp and have a moderate fat quantity.

Within two years the last animals of three relict population of Valtellina, Samolaco- and South-Tyrol pigs were brought together. By beginning of 2020 there are again 55 breeding groups, 29 in the mountains of the Italian provinces of Verona, Trento, Sondrio (Valtellina) and Alto Adige (South Tyrol), 12 in Switzerlanmd, 11 in Austria and 3 in the Bavarian Alps. Four breeding groups are located in agro-tourist farms and are publicly accessible. The herd register of Pro Patrimonio Montano is with 172 animals, based on 4 boars and 8 sows lines. The breed should still be brought to a genetically broader basis. Therefore, search tours to find relict populations will be continued to regions where similar animals were once kept.