Characteristic and giving the name to the various feather crested chicken in the Alps is the pointed hood on the head and a small, V-shaped comb. The German name "Spitzhauben" means "conical hood". The wattles are small. The risk of frostbite in winter is low. The crested chicken are light to medium animals (depending on variety), which are well adapted to the habitat in the mountains and foothills.

Some color varieties of the Appenzeller Spitzhauben

The pointed hood chickens were common for centuries in large parts of the central and eastern Alps (see distribution map). Already in the 15th century they have been bred in monasteries (for example in Salzburg). This was confirmed by the archaeozoologist Erich Pucher. In a 16th Century cesspool of an inn next to the Salzburg Residenz he found chicken bones with the typical protuberance for crested chicken on the skull. An even earlier evidence for the existence of crested hens in the 13th Century in Central Switzerland found Dr. Hermann Zimmermann in finds of chicken bones at Hallwil.

As in the end of the 19th Century, the chicken breeds have been described and standardized, the expert investigated first in the Tyrol and in the Bregenz Forest, then in central Switzerland, until finally finding the Spitzhauben in Swiss Appenzell. The breed henceforth was called "Appenzeller Spitzhauben". South of the Alps in the Italian Veneto another remainder of Spitzhauben survived, the today Polverara chickens. Also the Styrian hens (Altsteirer) in Austria and Slovenia still carry genes of these earlier crested chickens. The common variety in the Tyrol and Salzburg countries, the Tyrolean chickens, unfortunately died out in the first years of the 20th Century. From Switzerland "Spitzhauben" came with the timber floating on the river Rhine (entrainment of goats and chickens) in the Netherlands and established or at least influenced the Brabant chickens. From the mid-20th Century the Spitzhauben in Switzerland got in distress. Like other native breeds, they could not compete against the new hybrids. The stocks fell dramatically until the Appenzeller Chicken Club became engaged. To counter inbreeding problems and improve performance, greater levels of foreign breeds were crossed. This was mainly Dutch Brakel, Hamburg and La-Fleche chickens were used in the belief that this would belong to the ancestors of the Spitzhauben. With reasonably pure remaining animals the Swiss Foundation ProSpecieRara established in early 80s, a conservation program. The risk of inbreeding was met by crossing different color varieties within the breed and breeding back to the original color varieties. 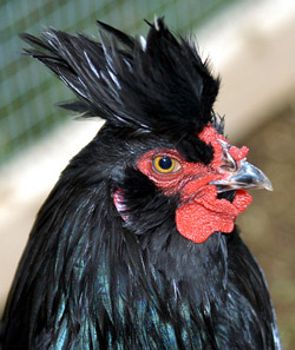 A similar fate befell the Polverara chickens that were once prevalent from Friuli to the Brenner passroad. The earliest known representation of this breed is a fresco in the chapel of San Michele Arcangelo in Padua in the year 1397. About Venetian trade routes the Polveraras came to foreign countries and influenced the local chicken breeds (Pawlowskaja, Sultan, Crève-Coeur, Brabant, etc.). The Swiss naturalist Conrad Gessner wrote in his 1555 published four-volume book "Historia animalium" that many strong and beautiful chicken from the village Pulverarie were sent to the "Turkish Emperor" (Sultan). Apparently the pointed hood chicken of the area had been bred in Polverara, a neighboring town of Padua, in the 16th Century to remarkable large chickens, which established the reputation of the animals and gave them the name of the place.

In the 18th Century were bred in France from Polveraras and other crested chicken breeds true fine specimens with extra wide hood and kept for the amusement of the nobility. Especially Madame de Pompadour was pleased at these extreme breeding. The chicken was called "Padou", not sure as abbreviation for Pompadour or Padua. It came in the 19th Century to the Italian town of Padua and displaced the original Polverara. In Italy the Padou is now called "Padovana" (in English "Polish chicken").

The Polveraras were almost extinct mid of 20th century. Thanks to the engagement of a Bruno Rossetto in 1954 they survived about 50 years in small numbers. On 28 January 2000, a conference brought together some persons interested in Polverara-breeding. A conservation plan was adopted and support for breeders promised. The reconstitution of thebreed could be made of the relict population of Bruno Rossetto. Headed by Prof. Gabriele Baldan a nucleus breeding was set up in the Osservatorio Avicolo "Ugo Meloni", Padua. In 2012 Bruno Rossetto (in the meantime 84 years old) provided a valuable, genetically independent cock-line to the project for the backbreeding of the Tyrolean chicken.