The Tyrolean chicken belonged to the feather crested chicken ("Spitzhauben") popular for centuries in the central and eastern Alps and most probably related to the widespread Polverara chicken south of the Alps in northeastern Italy. The "Spitzhauben" have been bred in Salzburg monasteries already in the 15th Century.

In an extensive publication (Festschrift) in honor of the fifty-year anniversary of the enthronement of Emperor Franz Joseph I in 1898 the Tyrolean chicken is mentioned as a breed recently achieving high prices in exhibitions. In 1902, the Tyrolean breed is then subject in the House of the Austrian Empire Council. During the deliberations on the Ministry of Agriculture, it is mentioned as a good example of high hardness, weather and disease resistance, which should be placed on the increased use of poultry. 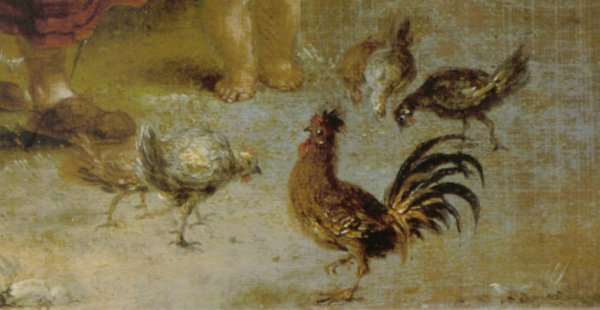 Description of the chicken

The Tyrolean chicken was a nice, medium-sized variety. There is only one modern photo of the chicken and it is even not sure if this is really the Tyrolean. The photo shows, in the background of a Grey Cattle bull, a black "pointed hood" chicken on a farm in the Upper Inn Valley. The breed was widespread throughout the Tyrol, Salzburg and Bregenzerwald, but especially around Innsbruck. The Tyrolean chicken were very good foragers and equipped with a large physical resistance to disease and weather conditions. Oral history tells that the black colour variation was maintained especially on remote farms, because the hawks left it in peace (the reason: Hawks thought they were crows fighting with the raptors). Pure gold and gold-speckled were however less well recognized by the fox, as they can hardly see red-brown (Bambi camouflage).

Tyrolean hen in the Thesis of Siegfried Drexel (photo cutout)